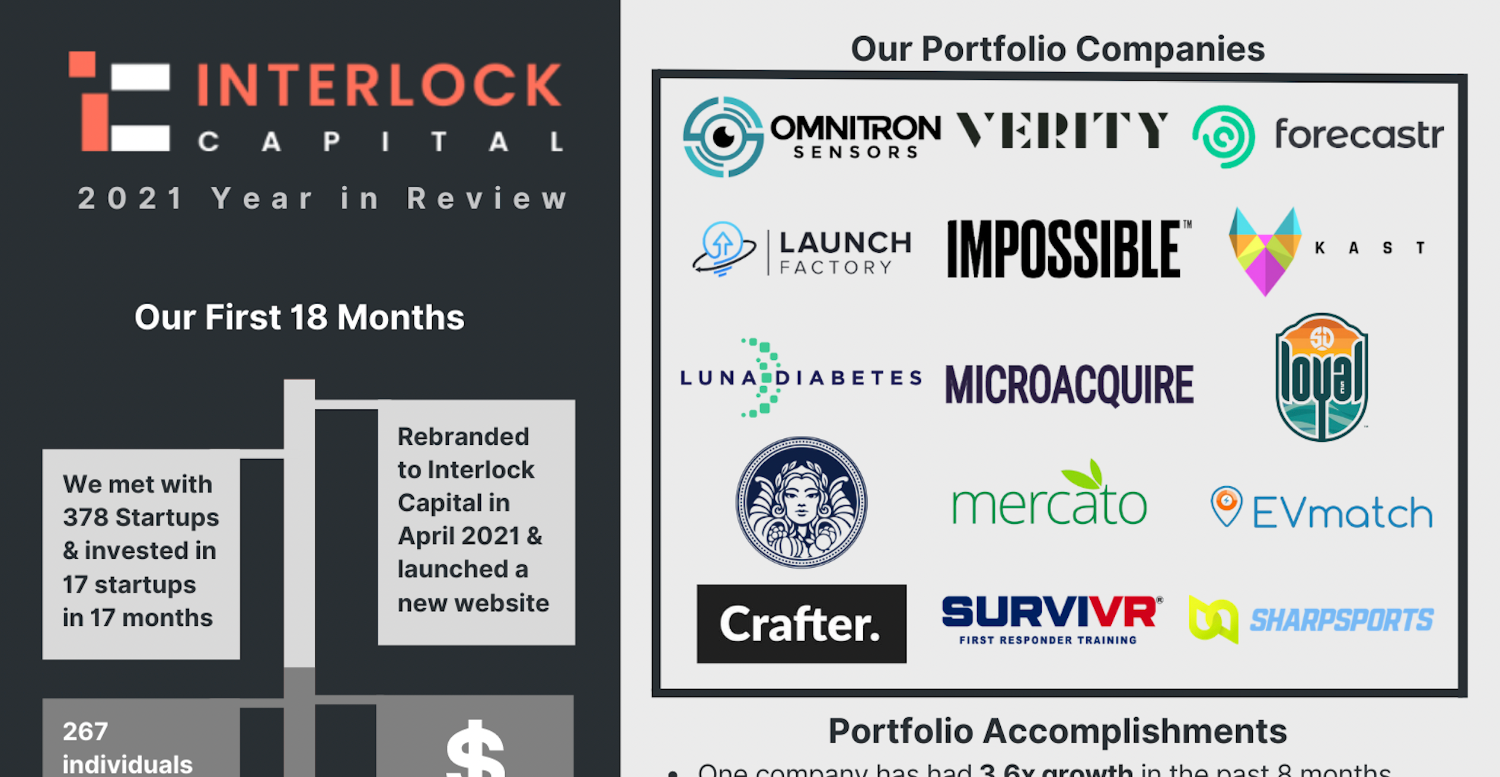 For the startup world, it largely was a good year, though we know many were affected by health, tough economic environments, and many more obstacles. No way to gloss over the hardships many are overcoming right now.

But for a time to build a tech business, it’s been a good year. And Interlock Capital fortunately rode that wave.

You can review our infographic, or read below for the details!

We (Al and Neal) have wanted to be angel investors the entirety of our entrepreneurial careers (a combined 3 decades and counting). While we started investing small, we wanted to make a bigger impact like writing bigger checks and helping the companies that we invested in. So we set out 18 months ago to build a new kind of VC firm that was accessible to not just seasoned angel investors (who have the capital and know what they’re doing), but also to aspiring operator angels (just like ourselves).

In 2020 at the beginning of the pandemic we launched a community driven investing firm, investing together in great founders and companies. Our investors (called Venture Partners) do far more than just provide capital. They also help Interlock operate its entire funnel. From finding the best deals to helping with diligence to funding to supporting their founders long-term - these are founders, executives, operators, and subject matter experts that are helping Interlock be successful.

We’ve made a lot happen since we launched, and we’re incredibly proud of the accomplishments Interlock has achieved thanks to this unique community and model.

Based on the momentum of our syndicates we’ve been asked to do more. We started raising our first venture fund just a couple of months ago and have nearly $3M committed out of $10M. Our first close is happening in February, and we’ll be able to start deploying capital from both this fund and our syndicates in parallel. Let us know if you’d like to join us.

We’ve also raised $2M in operating capital to allow us to grow and scale the team and our operations as if we were a much larger $50M fund.

We came out of stealth and rebranded to Interlock Capital in April 2021 and launched a new website.

We met with 378 startups

We made 17 investments in 17 months

We invested $3.6M into those companies

267 individuals (Venture Partners) invested with us in one or many of those deals.

47% of the deals we’ve invested in have come from our Venture Partners network.

67% of the deals we’ve invested in had VPs join as subject matter experts during diligence.

5 VPs we brought in early to help with diligence became full-time advisors at our companies. One is now a full-time employee.

When our Venture Partners refer another investor, we give them a 5% discount on carry. We’ve provided this discount 35 times!

We started sharing a new diversity survey with our Venture Partners and founders to gather even more information. That information is being shared in aggregate publicly and we will continue to be transparent about our progress.

We’ve built a custom platform where our investors can review extensive deal memos, see the diligence team’s background, ask questions, sign docs, and fund via ACH or wire. All via their phone within just a minute or two. It’s been called a “top 3 investment platform” by quite a few of our investors.

An investments page that outlines not just investments made, but also provides links to documents and even real-time company updates.

A new back-office system that streamlines the signing and funding process. You can connect via ACH directly to your bank and avoid wire fees!

Invest within a minute or two. From your phone. No joke!

Ability for investors to add their own skills and expertise via their profile page.

Our Managing Partner Al Bsharah was named Investor of the Year by Startup San Diego.

We gave numerous talks including co-hosting a weekly Clubhouse for 40 weeks in a row. We spoke at San Diego Startup Month, Founder Institute, UN’s Southeast Asian group of entrepreneurs, at the REC Innovation Lab, at the Green.co Conference and plan for many more this year.

Hosted two in person meetups (in-between Covid surges!) and we plan to do many more as things settle back down.

‍We’re incredibly proud of our founders and companies. Some of the wins from our portfolio:

If you’d like to invest with us, we’d love for you to reach out! You can become a Venture Partner (syndicate investor) or a Limited Partner (fund investor). We look forward to chatting with you! 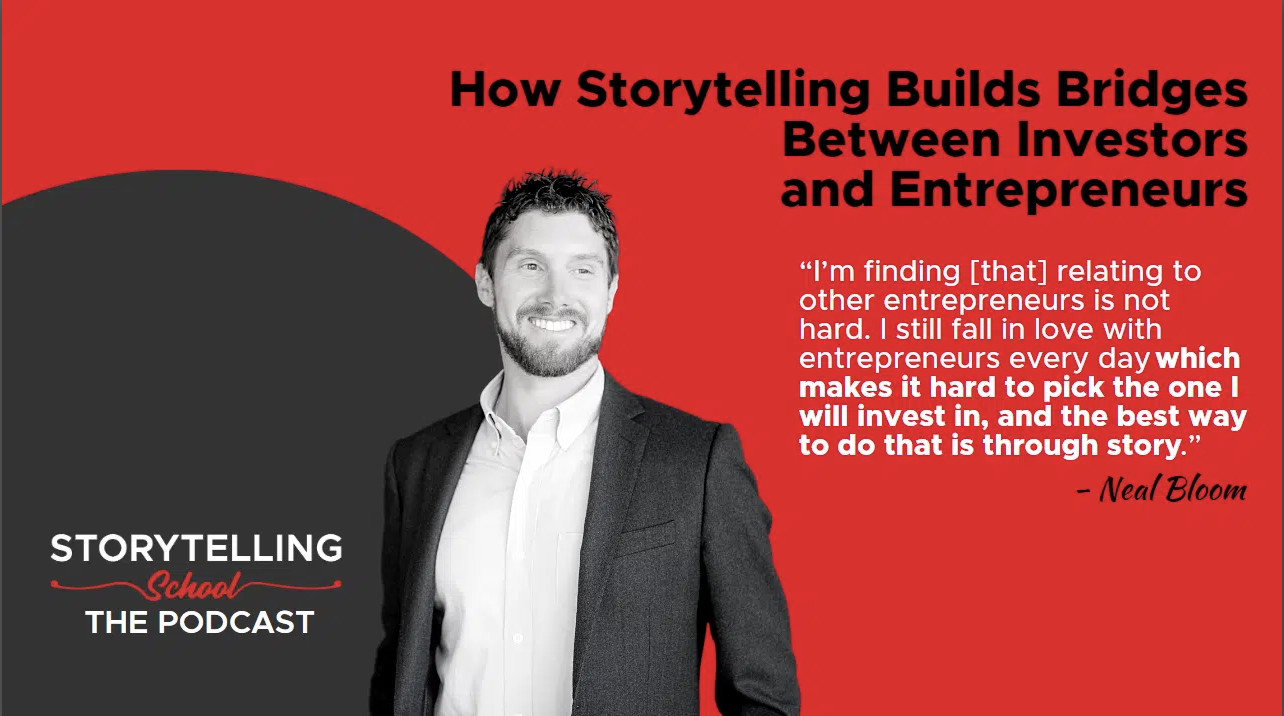 How Storytelling Builds Bridges Between Investors and Entrepreneurs